Island Made Outfitters was born from the love between a father and daughter! My dad, Pat Campbell of Charleston, South Carolina was diagnosed with Stage 2 Pancreatic Cancer in March of 2021. As always, or at least in most cases, this diagnosis was unexpected and devastating to the entire Campbell family. The news was devastating and optimistic at the same time. The doctors believed they had caught the cancer early and that he would be a great candidate for a surgery to remove this tumor.

As with many cancers, it had a mind of its own and following a failed surgery to remove the tumor, my dad began is battle using chemotherapy as his weapon of choice. This treatment took its toll both emotionally and physically, with one of the major side effects being his reaction to sun exposure of any kind.

On a day when you’ve just got to find the rainbows in the storm, the conversation started about how could we turn this horrible diagnosis/battle into something positive. We began talking about how all of the islanders, including the kids that my dad helped raise on the island have returned to surround him with love, prayers, and assistance. He spoke about how he worries about other patients that don’t have the support that he does – and how they navigate the path to healing alone.

We are taking some time to mourn our founder/leader Pat Campbell, so we have disabled our store so that we can focus on celebrating his life rather than business. If you are seeking to support – Please make a donation in his name, below.

Thank you for your continued support. We will be back to continue his work!

JOIN US for his CELEBRATION of LIFE

Following many discussions, tears and yes, laughs – Island Made Outfitters was born! It came to us as if we were always supposed to be doing this. My dad designed the first design for our shirts many years ago for a camping group that he was apart of and with the assistance of a local islander, Taylor Monk, the design came back to life and jump started the Island Made Outfitters UPF50 line.

We have now created our second design of which we are anticipating being our signature shirt. This design encompases the islands that make up South Carolina and will be offered in multiple colors to bring awareness to different cancers.

As we build this company, our goal is to GIVE BACK! We plan to create a Non-Profit that will provide “concierge” type support services to those stricken with cancer that stand alone on their island. Our shirts will not only provide protection from the sun, but in time will also provide a format to give a voice and support for many that will be in need as they move through the process of fighting cancer!

Thank you for your support, it is truly appreciated! 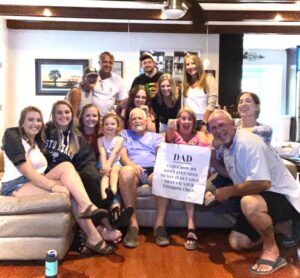 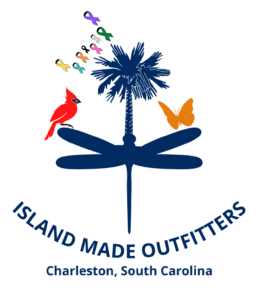 Our designs have been a labor of love and focus for our cancer patient. It has helped him to stay positive, creative and to look forward to the launch of each. To see the community embrace his designs and to wear them proudly in support of this mission has been a true Blessing, and we want to do this for more people in our community suffering from this hideous disease.

We are launching the ISLANDS AGAINST CANCER program, where we select local cancer patients, survivors, heroes, and families to work with and assist them to create their own designs, place them on T-Shirts and highlight them and their stories through our channels.

If you meet the criteria – submit this form of interest.

God Bless You All!

Meet our Designers, our Sponsors & our Events

We are taking some time to mourn our founder/leader Pat Campbell, so we have disabled our store so that we can focus on celebrating his life rather than business. If you are seeking to support – Please make a donation in his name, below.

Thank you for your continued support. We will be back to continue his work!

THANK YOU to our Event Sponsors!!